Systems Thinking in the Public Sector: The Failure of the Reform Regime…. and a Manifesto for a Better Way

With the UK’s public sector in crisis, John Seddon’s fiercely outspoken new book is already causing a stir. Wrong-headed, ill thought-out reform from a succession of monetarist governments has led to unwieldy systems of mass production that do little for the people they are supposed to serve. Hospitals, local authorities, schools, housing associations, taxation and benefits offices: all are victims of a dysfunctional regime created by a government-enforced culture of deliverology that puts targets and red tape before people. In Systems Thinking in the Public Sector, John Seddon argues powerfully for the government to forget sticking plasters like CRM and citizen empowerment and says don’t tweak the system. Ditch it. Systems Thinking in the Public Sector gives example after example of exactly how the system fails from housing benefits and care for the elderly to call centres like Consumer Direct. Drawing on Seddon’s extensive experience working as a consultant with UK public sector managers, this is a fiercely uncompromising, yet rigorous manifesto for change. 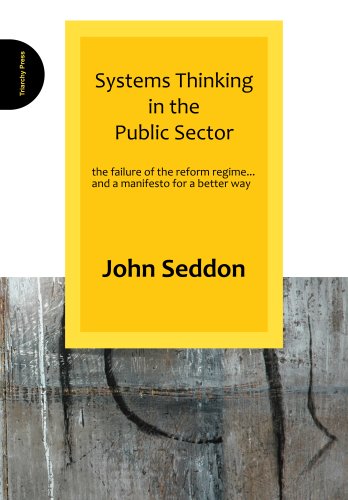