The Corrosion of Character: Personal Consequences of Work in the New Capitalism

Drawing on interviews with dismissed IBM executives in Westchester, New York, bakers in a high-tech Boston bakery, a barmaid turned advertising executive, and many others, Sennett explores the disorienting effects of the new capitalism. He reveals the vivid and illuminating contrast between two worlds of work: the vanished world of rigid, hierarchical organizations, where what mattered was a sense of personal character, and the brave new world of corporate re-engineering, risk, flexibility, networking, and short-term teamwork, where what matters is being able to reinvent yourself on a dime. In some ways the changes characterizing the new capitalism are positive; they make for a dynamic economy. But they can also be destructive, eroding the sense of sustained purpose, integrity of self, and trust in others that an earlier generation understood as essential to personal character.The Corrosion of Character enables us to understand the social and political context for our contemporary confusions and Sennett suggests how we need to re-imagine both community and individual character in order to confront an economy based on the principle of â€œno long term.â€ 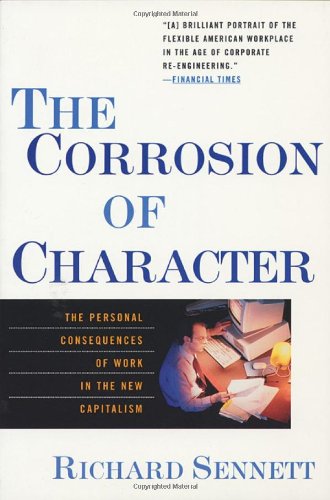