The End of Government… as We Know It: Making Public Policy Work

In the last decades of the 20th century, many political leaders declared that government was, in the words of Ronald Reagan, “the problem, not the solution.” But on closer inspection, argues Elaine Kamarck, the revolt against “government” was and is a revolt against bureaucracy – a revolt that has taken place in first world, developing, and avowedly communist countries alike. To some, this looks like the end of government. Kamarck, however, counters that what we are seeing is the replacement of the traditional bureaucratic approach with new models more in keeping with the information age economy. “The End of Government” explores the emerging contours of this new, postbureaucratic state – the sequel to government as we know it – considering: What forms will it take? Will it work in all policy arenas? Will it serve democratic ideals more effectively than did the bureaucratic state of the previous century? Perhaps most significantly, how will leadership be redefined in these new circumstances? Kamarck’s provocative work makes it clear that, in addition to figuring out what to do, today’s government leaders face an unprecedented number of options when it comes to how to do things. The challenge of government increasingly will be to choose an implementation mode, match it to a policy problem, and manage it well in the postbureaucratic world. 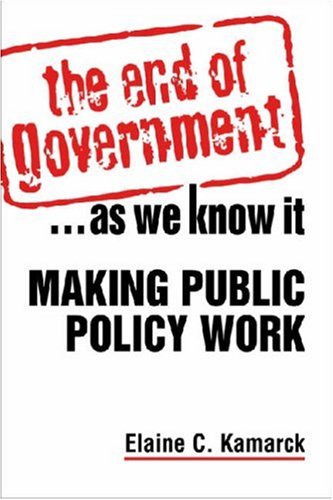