The Shock Doctrine: The Rise of Disaster Capitalism

The neo-liberal economic policiesâ€”privatization, free trade, slashed social spendingâ€”that the Chicago School and the economist Milton Friedman have foisted on the world are catastrophic in two senses, argues this vigorous polemic. Because their results are disastrous – depressions, mass poverty, private corporations looting public wealth, by the author’s accounting – their means must be cataclysmic, dependent on political upheavals and natural disasters as coercive pretexts for free-market reforms the public would normally reject. Journalist Klein (No Logo) chronicles decades of such disasters, including the Chicago School makeovers launched by South American coups; the corrupt sale of Russia’s state economy to oligarchs following the collapse of the Soviet Union; the privatization of New Orleans’s public schools after Katrina; and the seizure of wrecked fishing villages by resort developers after the Asian tsunami. Klein’s economic and political analyses are not always meticulous. Likening free-market shock therapies to electroshock torture, she conflates every misdeed of right-wing dictatorships with their economic programs and paints a too simplistic picture of the Iraq conflict as a struggle over American-imposed neo-liberalism. Still, much of her critique hits home, as she demonstrates how free-market ideologues welcome, and provoke, the collapse of other people’s economies. The result is a powerful populist indictment of economic orthodoxy. Publishers Weekly 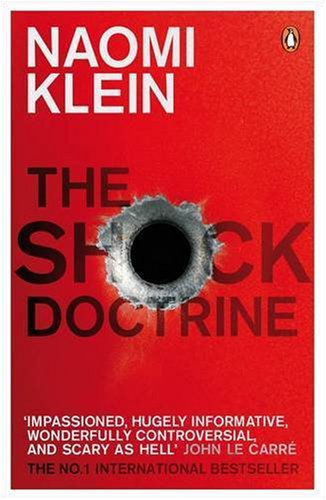