The Danish Ministry of Science, Technology and Innovation published in October 2004 ”Architecture for Digital Administration – Handbook on Concepts, Frameworks and Processes”, also just known as ”The Handbook”. The document described how the public administration faces new challenges and demands that can only be met through a systematic planning of the use of it. The planning must compare the needs of the business with what the systems and technologies in use currently offer, consider the opportunities that new technologies offer, and based on this define the future system landscape and a plan for realizing this. A plan for this is called an enterprise architecture, abbreviated EA.

”The Handbook” drafted an approach to develop such an enterprise architecture. It described which considerations to make in the individual steps, and gave examples on which methods to use. The overall framework method was the one depicted below. 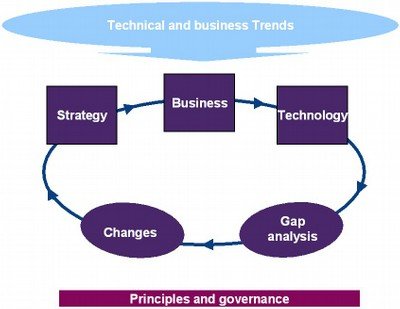 OIO EA comes in a static and a dynamic version. The static comprises a number of documents, including an Introduction to OIO EA, a description of the individual steps, a collection of scenarios, and a description of the OIO EA framework. These documents can be downloaded and printed. The dynamic version is an interactive handbook with links to other resources within and outside the OIO EA portal. The OIO EA portal is ongoing being expanded with new, relevant content.

OIO EA can be used for various purposes, including: